A tax parcel is a division of land developed for the sole purpose of creating a complete, accurate, and equitable unit of taxation in support of taxpayers, contributing a fair share of support for the community services received.

A tax parcel, also referred to as real property or real estate, is created for assessment and taxation purposes. The parcel is usually defined by a legal description and, by following that description, the user should be able to locate the parcel on a tax parcel map. The complete tax parcel will vary between counties on the digit count.

When the boundaries of existing parcels are changed and either consolidated or separated to create one or more parcels with new and different boundaries, a county may either:

Tax parcels are created when the geometry of one or more parcels are changed due to a result of surveys, splits, combinations, realignments, conversion cleanup or mapping/research. When the geometry of existing parcels (parent) changes the parcel becomes inactive and the newly created parcels (child) become the active parcels. Conversion cleanup and mapping/research can create new parcels that were not carved out of an existing parent parcel. 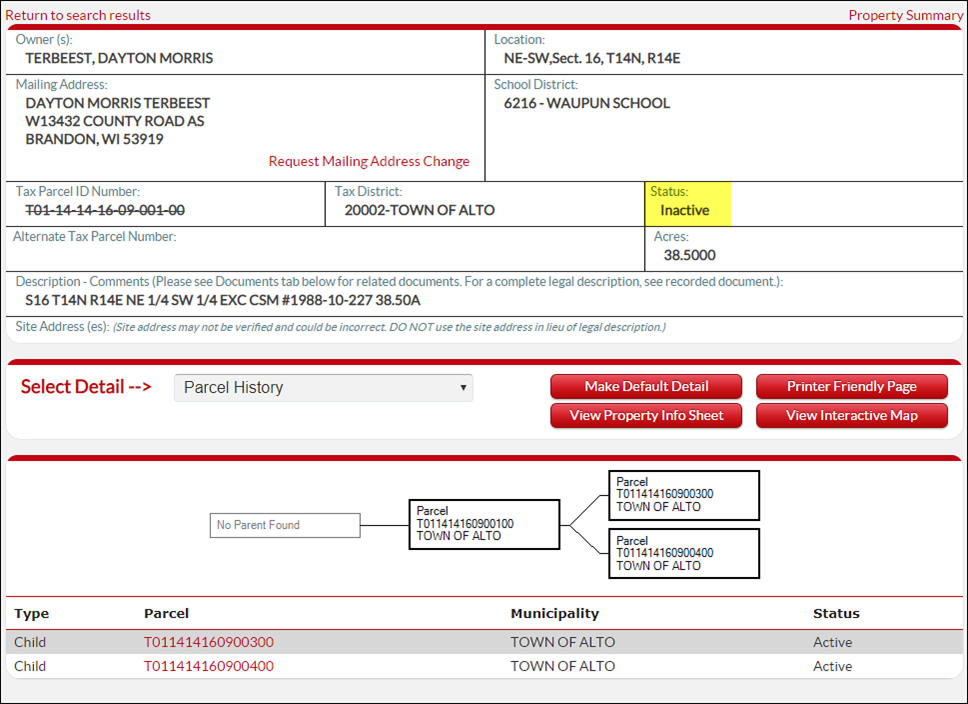 This page represents the Tax Parcel Detail for the parcel T011414160900100 in the Town of Alto, Fond du Lac County. Note that the Status of this parcel is indicated to be Inactive. In fact, this parcel was involved in a split transaction created by a Certified Survey Map that was recorded on 07/16/2012. This split created two new parcels carved out from the parent parcel: T011414160900300 and T011414160900400. Notice that Fond du Lac County utilizes a retiring number system; the parent parcel number (i.e. T011414160900100) has been decommissioned forever and the two child parcels receive entirely new parcel numbers. In a retiring number system every parcel in the county, regardless of whether it is active or inactive, will be unique.

Did you find it helpful? Yes No

Send feedback
Sorry we couldn't be helpful. Help us improve this article with your feedback.